Hunting rhino in South Africa is the greatest heart-pounding experience and has traditionally been one of the biggest milestones of the Big Game hunter’s achievements when hunting in Africa to complete their big five collection. This majestic animal is known to be the second-largest land animal in the world and can be quite elusive- ensuring the most remarkable and rewarding hunting experience!

In the past, due to the demand for rhino horn, Rhinos have almost been hunted to extinction, but thanks to hunters and conservationists, white rhino numbers increased significantly in the last few years. Unfortunately, Black rhino is still a protected species.

Both Rhino species can be hunted, however the Black Rhino hunting permits requirements are much stricter than those of the White Rhino. When booking a rhino hunt, it is of utmost importance to book with an outfitter that has a good reputation and who specialises in big game hunting.

We pride ourselves not only in top trophy quality, but also in the most memorable, authentic African hunting experience – ensuring that every hunt is an experience you will never forget!

Rhinoceroses are large, herbivorous mammals identified by their characteristic horned snouts. The word "rhinoceros" comes from the Greek "rhino" (nose) and "ceros" (horn). Rhinos are one of the members of the big 5.

Rhinoceroses are some of the largest remaining megafauna: all weigh at least one tonne in adulthood. They have a herbivorous diet, small brains (400–600 g) for mammals of their size, one or two horns, and a thick (1.5–5 cm), protective skin formed from layers of collagen positioned in a lattice structure. They generally eat leafy material, although their ability to ferment food in their hindgut allows them to subsist on more fibrous plant matter when necessary.

The White Rhino is an extremely large animal and can weight up to 2 tons.
Due to their very thick and tough skin, a 375 H&H is by law the minimum caliber rifle that should be used for hunting rhino in South Africa. Because their skin is so thick, larger calibers such as the .416 to .458 calibers are better to ensure proper penetration.

The best ammunition to use for hunting rhino in South Africa is a premium, good quality, solid bullet such as Barnes solids in 300 grains and bigger weight. Alternatively, you can use any premium solid bullet. 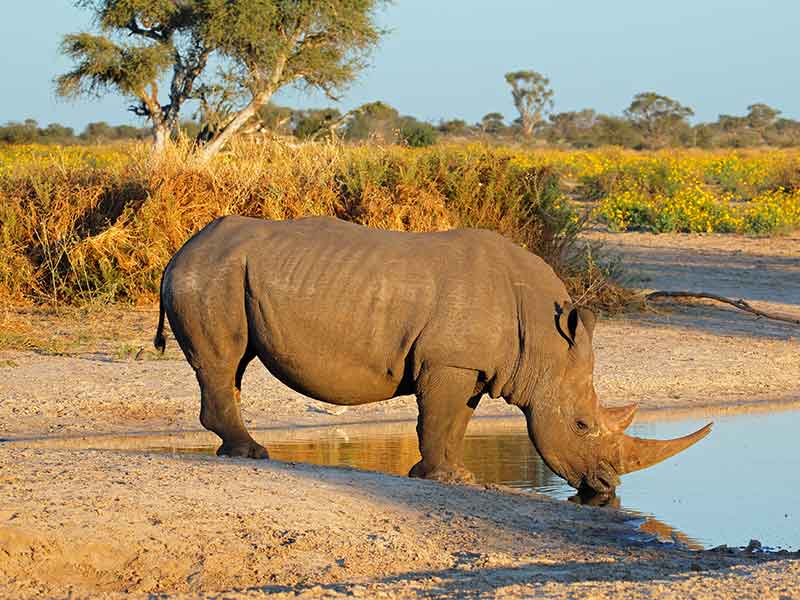